Apple and Walgreens have partnered up on a new offer to entice U.S. users to sign up for Apple Card, with users who open an account during the month of June eligible to receive $50 in bonus Daily Cash if they spend at least $50 on their ‌Apple Card‌ at Walgreens within the first 30 days. 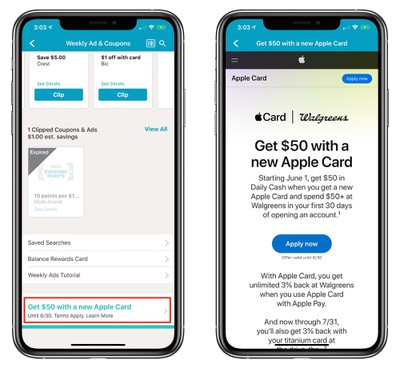 The offer can be found in the Walgreens iOS app at the bottom of the Weekly Ad & Coupons page, and you can tap directly from the offer page into the Wallet app to start an ‌Apple Card‌ application.

For users with an Apple Cash card, Daily Cash earned through ‌Apple Card‌ purchases is transferred to Apple Cash, where it can be used for person-to-person payments and more. Alternatively, it can be applied to an outstanding ‌Apple Card‌ balance.

Walgreens has been a close partner with Apple in promoting ‌Apple Card‌ benefits, becoming one of the select merchants offering a premium 3% Daily Cash back on purchases made using an ‌Apple Card‌ via Apple Pay.

In April, Walgreens expanded the 3% Daily Cash offer to include purchases made with a physical ‌Apple Card‌ at Walgreens drive-thrus. That offer was originally set to expire at the end of June, but has since been extended through July.