Subscribe to the MacRumors YouTube channel for more videos.
In our latest video, we went hands-on with all three of Apple’s new machines for a detailed performance comparison to give MacRumors readers some insight into which device might be the best purchase for their needs.

We’re comparing base model devices from Apple, with specs and price points below:

The ‌iPad Pro‌ is also available in a smaller 11-inch model that we did not use for this comparison, and pricing on that model starts at $799 for the tablet and $299 for the keyboard. 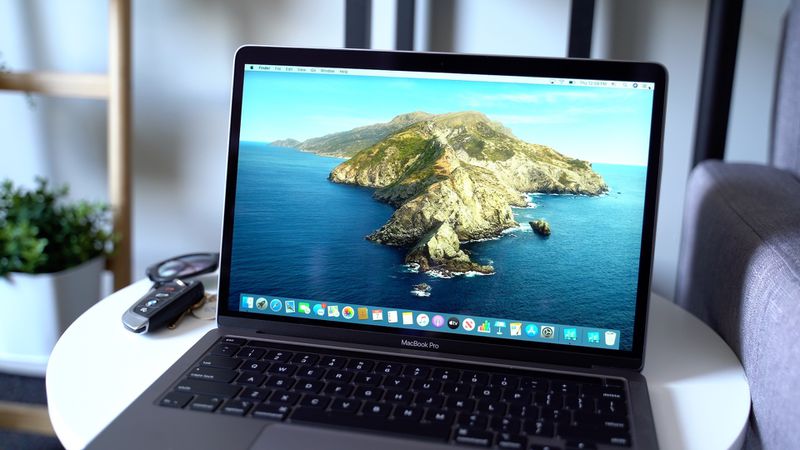 The ‌MacBook Pro‌ has a brighter display and a Touch Bar, while the ‌MacBook Air‌ has an hour more battery life and it supports up to a 6K display.

The two machines are close to the same size, though the ‌MacBook Air‌ has a tapered design and weighs 2.8 pounds compared to the 3.1 pounds of the ‌MacBook Pro‌.

The ‌iPad Pro‌, of course, is radically different because it is a tablet with a touch screen that morphs into a laptop-like design with the addition of the Magic Keyboard. The Magic Keyboard also has scissor switch keys and a trackpad, though it’s smaller and doesn’t use Force Touch.

We used Geekbench 5 on all three machines to test the overall performance, and unsurprisingly, Apple’s ‌iPad Pro‌ is the fastest of the bunch. Apple’s modern A-series chips beat out many similar Intel processors, and while Apple is working on Arm-based Macs, we still have a year or so until those are ready to launch.

The ‌iPad Pro‌ has Apple’s A12Z chip, which is similar to the A12X chip used in the 2018 iPad Pros, though an extra GPU core has been enabled in the new model to boost performance up just a bit.

We also did some real world testing to see how those benchmarking scores translate into actual performance, because how a device performs when being used for everyday tasks is more important than how it benchmarks.

Exporting a 4K five minute video in Final Cut Pro on the ‌MacBook Pro‌ took 4 minutes and 10 seconds. On the ‌MacBook Air‌, it took 5 minutes and 30 seconds, which is no surprise given that it has a slower CPU and GPU.

There is no Final Cut Pro software on the ‌iPad Pro‌ of course, so there’s no direct comparison to make, but exporting a 4K five minute video in Luma Fusion took just three minutes, which is faster than both the ‌MacBook Pro‌ and the ‌MacBook Air‌.

As mentioned above, for example, there’s no Final Cut Pro on the ‌iPad Pro‌ for video editing purposes, and the same goes for Logic Pro. There’s no Xcode on ‌iPad Pro‌ for app developers, and while the ‌iPad Pro‌ supports multitasking, it’s limited to two apps open and used side by side at one time.

Video quality on the ‌iPad Pro‌ is much, much better because Apple hasn’t upgraded the 720p camera on the MacBooks for years now, which is nice for Zoom, Skype, FaceTime, and other video interactions, though it’s kind of a hassle to use the front-facing camera with the Magic Keyboard attached because it’s located at the top of the ‌iPad Pro‌.

The ‌iPad Pro‌ has a major advantage when it comes to activities like note taking, reading textbooks, making flash cards, and more, thanks to the Apple Pencil integration and the ability to use it in either landscape or portrait mode.

The ‌Apple Pencil‌ is ideal for taking handwritten notes with diagrams and sketches, and reading textbooks is easier in portrait mode than it is on a wider screen.

Creative work can be done on any of the machines, but again, the ‌iPad Pro‌ has an edge for artists because of the ‌Apple Pencil‌ support. Video and audio editing are more limited on ‌iPad Pro‌ for those who are used to software like Final Cut Pro or Logic X, but there are some comparable apps.

Photo editing and graphic design can be done on an ‌iPad‌ using apps like Photoshop and Lightroom, so there are many alternative workflows for people who need to do creative tasks using the ‌iPad‌’s tools.

When it comes to writing documents, browsing the web, and similar tasks, the Magic Keyboard elevates the ‌iPad Pro‌ to the level of the ‌MacBook Air‌ and the ‌MacBook Pro‌ and is vital for those who want a laptop-like machine that’s much more versatile.

If the ‌iPad Pro‌’s shortcomings in software and multitasking don’t impact your workflow, it’s the most capable of the three, given that it converts from a laptop-style machine to a tablet, supports ‌Apple Pencil‌, and has the fastest performance.

The ‌MacBook Air‌ is the best value of the three because of its $999 price point. It’s the perfect machine for every day tasks like document creation, writing, and web browsing, plus it can also handle video editing, photo editing, and similar tasks (though it’s not the machine to get if you’re looking at exporting large videos all the time or doing super system intensive work).

The ‌MacBook Pro‌ is a more robust machine better suited to tasks that need more CPU and GPU power, but to really take advantage of the ‌MacBook Pro‌’s capabilities, you’d probably need to step up to the $1,799 machine rather than relying on the entry-level model with its older processor.

What are your thoughts on these three machines? Do you have one? Which did you choose and why? Let us know in the comments.

Apple recently updated the 13-inch MacBook Pro, and the $1,299 base model remains a popular alternative to the $999 MacBook Air. To help with your buying decision, read our comparison of the notebooks below. 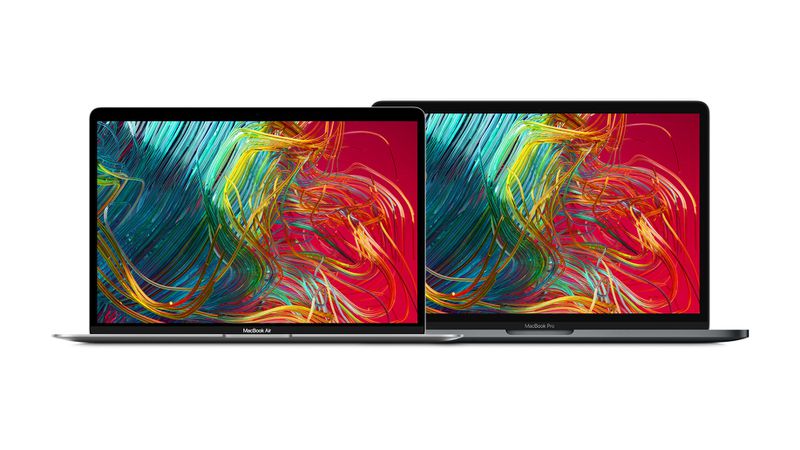 The differences between the base 13-inch MacBook Pro and the MacBook Air are quite nuanced, with each notebook possessing some unique features.

Advantages of Base 13-Inch MacBook Pro

Generally speaking, the MacBook Air remains best suited for lightweight day-to-day tasks like web browsing and creating spreadsheets, while the MacBook Pro is better equipped to handle more intensive tasks like rendering large video files. This is not only because the MacBook Pro has faster processors than the Air, but also because it has a more advanced thermal design for dissipating heat inside the computer.

While the MacBook Air has been updated with Intel’s latest 10th-generation processors, the base 13-inch MacBook Pro continues to use older 8th-generation processors. However, the Air uses lower-wattage Y-series chips with lower clock speeds, so the Pro still has faster overall performance, as confirmed by benchmarks.

Geekbench 5 scores are calibrated against a baseline score of 1,000, which is the score of an Intel Core i3-8100. Higher scores are better, with double the score indicating double the performance. Compare with other Mac benchmarks here.

If you value portability and up to an extra hour of battery life, and are willing to sacrifice some performance, the MacBook Air is a relatively good value. Just remember to consider spending an extra $100 on the quad-core Core i5 processor option, as the $999 base model is equipped with a particularly sluggish dual-core processor.

For more intensive tasks, the 13-inch MacBook Pro’s faster processors and more advanced thermal design will allow you to push the limits more without the fans running obnoxiously. You’ll also get the Touch Bar, a brighter and more vibrant display, and slightly better sounding speakers with high dynamic range.

Apple in March updated both the MacBook Air and the iPad Pro, and with the ‌iPad Pro‌ increasingly positioned as a computer replacement, we thought we’d compare both new machines to see how they measure up and which one might be a better buy depending on user needs.

Subscribe to the MacRumors YouTube channel for more videos.
We’re comparing the base model 12.9-inch ‌iPad Pro‌ and the base model 13-inch ‌MacBook Air‌. The base 12.9-inch ‌iPad Pro‌ features an A12Z chip with an 8-core CPU and GPU, 6GB RAM, and 128GB storage space. It’s priced at $999, but there’s no keyboard included, and a keyboard is a definite requirement for using an ‌iPad Pro‌ in lieu of a traditional notebook computer. 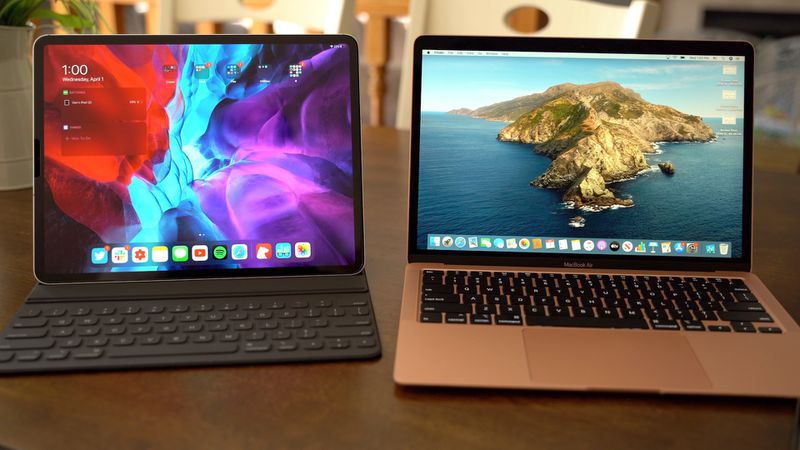 Keyboards can be cheap if you’re using a simple Bluetooth solution, or expensive if you choose the $179 Smart Keyboard Folio. If you’re holding out for the Magic Keyboard with trackpad that’ll bring an even more MacBook-like experience to the ‌iPad Pro‌, expect to spend an additional $350 for the 12.9-inch version ($300 for the 11-inch model).

The base 13-inch ‌MacBook Air‌ features a 1.1GHz dual-core Core i3 processor and Intel Iris Plus Graphics, 256GB of storage, and 8GB RAM. It too is priced starting at $999, and doesn’t require any additional purchases, though it’s often worth paying extra to upgrade the processor and the RAM if you can afford it.

When it comes to raw performance, if you compare Geekbench scores, the ‌iPad Pro‌ comes out on top, and by a wide margin. Single-core scores for the i3 chip in the ‌MacBook Air‌ are typically right around 1070, while multi-core scores are around 2100.

iPad Pro scores, though, are right around 1,100 when it comes to single-core performance, and much more impressive in multi-core performance with scores closer to 4670. In raw performance, the ‌iPad Pro‌ is going to give you more bang for your buck, but operating system limitations are worth taking into account.

Both of these devices are designed for content consumption and creation, but are not ideal for some of the most system intensive tasks like 3D rendering or video editing. In general, though, they’re both capable of the same kinds of basic tasks – browsing the web, coding, sending emails, writing documents, playing games, etc., but the ‌iPad Pro‌ is going to be better for gaming and it has features the ‌MacBook Air‌ is just lacking, such as the dual camera setup and LiDAR Scanner.

Given the faster processor, the ‌iPad Pro‌ is better if you do want to do things like edit videos, record music, edit photos, and more. It’s quiet, it’s fast, and it definitely has an edge over the ‌MacBook Air‌ for system intensive tasks. It’s a wash when it comes to battery life as both offer 10 to 11 hours, but in terms of connectivity, the ‌iPad Pro‌ offers both WiFi 6 and a cellular option, useful for working anywhere.

As for design, both devices are portable and easy to take anywhere, but there are also a lot of differences to be aware of. You have a traditional notebook form factor with built-in trackpad and keyboard with the ‌MacBook Air‌, but the ‌iPad Pro‌ offers a touch-first experience. You can add a keyboard, of course, but it’s still a much different usage experience.

Someone who has a long history working with a notebook form factor may have a harder time adjusting to the touch experience of the ‌iPad Pro‌, while someone who primarily works off of an iPhone or other touch device will be able to adjust to non-notebook life more quickly.

With trackpad and mouse support added in ‌iPadOS‌ 13.4, using an iPad is more like using a Mac notebook than ever, but so far, the trackpad experience just isn’t as good as the built-in trackpad on the Mac. It’s just not as simple to use, at least not yet. That could change when Apple releases its Magic Keyboard.

Choosing between the ‌iPad Pro‌ and the ‌MacBook Air‌ as a main machine for work and home use will come down to each individual’s work habits, preferences, software requirements, and workflow. A multitasking heavy workload that requires multiple apps to be used at once won’t translate well to an ‌iPad‌, but a job that requires more focus on a single app like writing or coding could work well on an ‌iPad‌.

Do you use an ‌iPad‌ as a main work machine in lieu of a Mac or PC? Do you prefer the ‌iPad Pro‌ over the ‌MacBook Air‌, or vice versa? Let us know in the comments.