Apple has significantly added to the data available through its Mobility Trends Reports tool using information collected from Apple Maps. 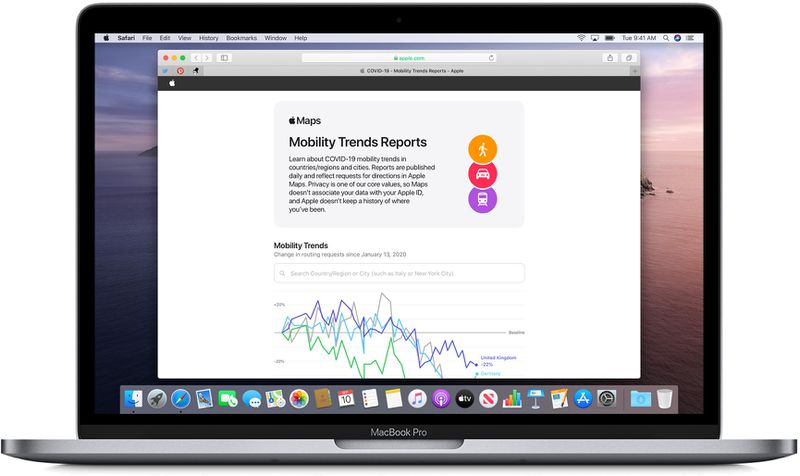 Apple’s reports are designed to help mitigate the spread of COVID-19 by providing helpful insights to local governments and health authorities, although anyone can use the tool to search by country, region, or city to see specifics trends for an area.

When Apple released the tool last month, it included data from major citis and 63 counties or regions. As noted by Asymco’s Horace Dediu (via 9to5Mac), Apple has added approximately 580 new sub-regions to its database.

According to Dediu, all U.S. states and 530 other providences are now represented in the data. Apple generates the data by counting the number of requests made to ‌‌Apple Maps‌‌ for directions.

The data sets are compared to reflect a change in the number of people who are driving, walking, or taking public transit, and Apple says that data availability in a particular place is subject to factors like minimum thresholds for direction requests made per day.

With the tool, users can search to see how routing requests have shifted since January 13, 2020, leading up to today. Apple also provides a complete downloadable data set that features daily changes in requests for directions by transportation type for all available countries and cities. 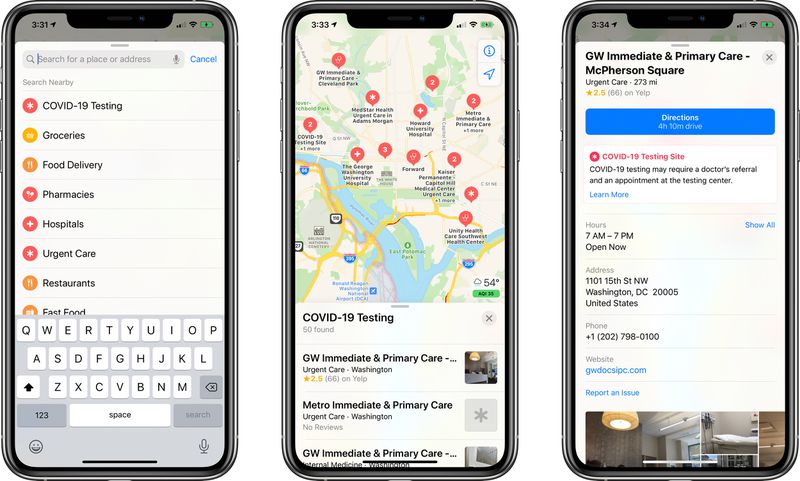 When opening up the search interface in Maps, COVID-19 testing is now the first option in the list, and tapping it brings up all of the testing sites in your local area.

Tapping on one of the testing site entries provides a link to the hospital or testing site’s website with specific information on how testing is done, such as whether a doctor’s referral or an appointment are required to have the testing conducted.

Apple on April 11 launched an online portal allowing healthcare providers, labs, hospitals, and other businesses to register as COVID-19 testing locations. The ‌Apple Maps‌ team reviews each application before allowing approved sites to be displayed on ‌Apple Maps‌. As pointed out by Engadget, the testing site list is available in all U.S. states and Puerto Rico.

Apple in early April updated the Maps app to prioritize searches for groceries, food delivery, pharmacies, hospitals, and urgent care, and these categories also show up with COVID-19 testing sites.

Apple this week has expanded its “Look Around” feature for Apple Maps to include Chicago, the latest major U.S. city to gain the 3D street-level imagery to compete with Google’s Street View. 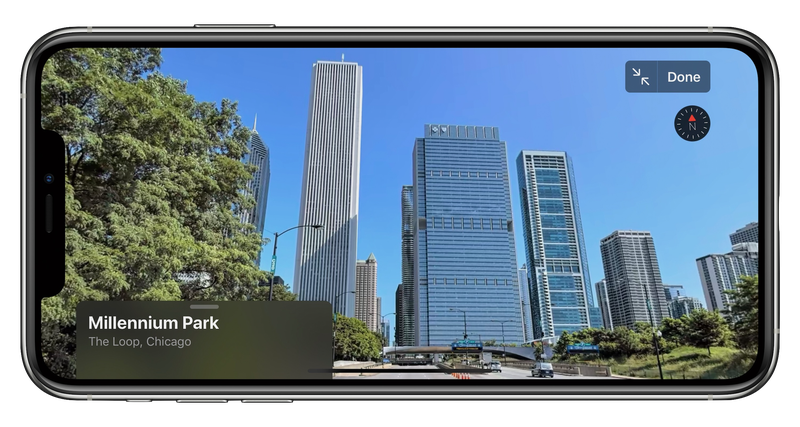 The expansion of Look Around to Chicago has been documented in detail by Justin O’Beirne, who notes that this brings the total number of metropolitan areas with Look Around to ten. The most recent expansion prior to this week came in February when Boston, Philadelphia, and Washington, D.C. were added.

As O’Beirne notes, while Look Around only covers 0.3 percent of the land area in the United States, it covers 13.8 percent of the U.S. population. That’s still a far cry from Google’s nearly ubiquitous Street View coverage, although Look Around has been compared favorably to Street View for the quality of its imagery and the smoothness of transitions as you navigate around.

In areas where Look Around is available, a binoculars icon will appear in the top-right corner of ‌Apple Maps‌. Tapping that icon opens a street-level view in a card overlay at the top of the screen, which can then be expanded to a full-screen view. Look Around also appears in the search results for a supported city, below the Flyover and Directions buttons.

Apple is unsurprisingly prioritizing the largest cities in the U.S. with its Look Around feature in order to most efficiently cover the largest number of people, with O’Beirne noting that eight of the ten Look Around areas rank among the ten largest urban areas in the country. The two outliers, Las Vegas and Honolulu, are major tourist destinations and thus also prime targets for the feature.

O’Beirne has much more in his blog post on the expansion, including some predictions on which cities might be next to see Look Around. 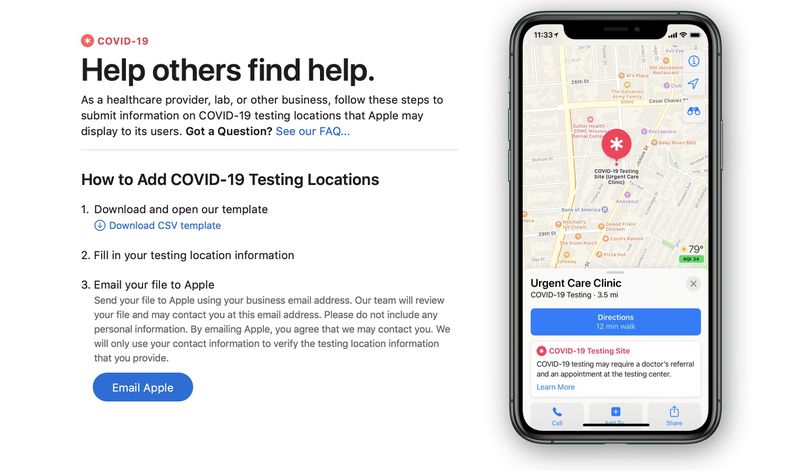 Testing locations will appear with a red medical glyph icon and a unique “COVID-19 Testing Site” card. ‌Apple Maps‌ will display the place name, associated healthcare provider, contact number and website, as well as information about the type of testing location. Apple is also asking applicants to state whether the testing location will require a doctor’s referral or a scheduled appointment.

Apple does not say exactly how long it will be before testing locations will begin to appear in Maps, but assures that it is working quickly to verify and add as many testing locations as possible. The feature appears to be international.

Apple has updated the search feature in the Apple Maps app to focus on categories that are most important to people right now: groceries, food delivery, pharmacies, hospitals, and urgent care. 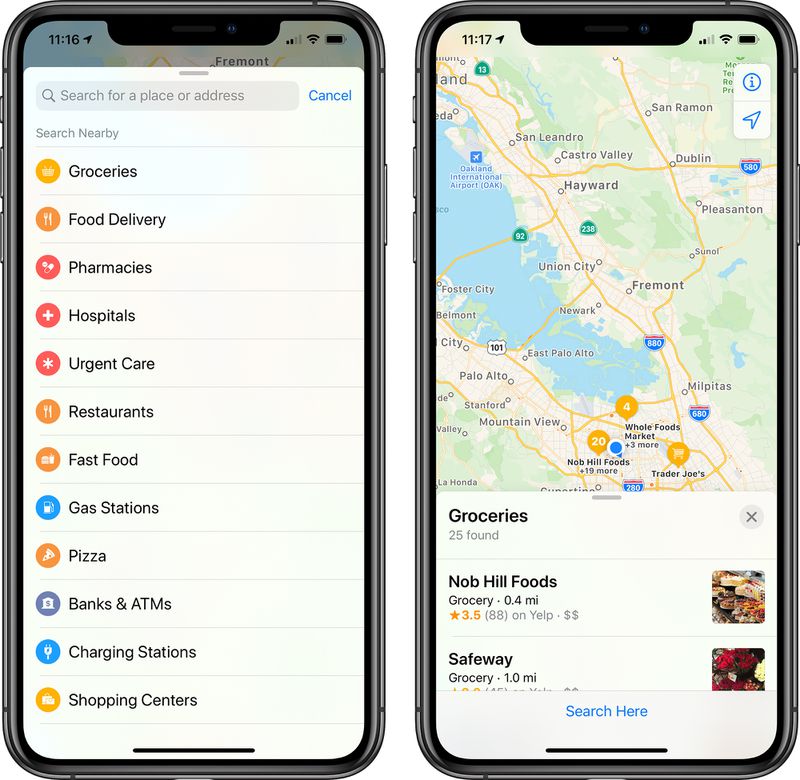 These category options come up first when searching, coming ahead of restaurants, fast food, gas stations, banks, and other categories that used to be higher priority in the list.

Places that are currently closed, such as shopping centers, are at the bottom of the search category list. These changes were first noticed by German site iPhone Ticker, which also points out similar changes that have been made in the Google Maps app.

Google Maps has gone even further than ‌Apple Maps‌, letting users know when a business is closed or has shorter hours. The app also warns users to call a doctor before visiting a medical location.